Water, Concrete, Mud: What It's Like to Add on to a House 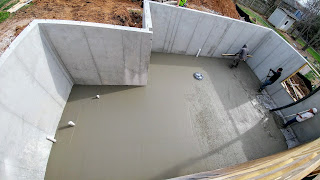 Rain streamed from the sky in roaring sheets. Hubby peeked through a gap in the plywood nailed to the recently cut opening between the home’s existing foundation and the newly-poured addition. The concrete slab surrounded by smooth cement walls was now a wading pool.

Inside? At his feet? Rainwater crept over the threshold and drained into the existing basement.

He slogged outside and dropped a sump pump into the concrete pool. As rain pelted his skin and wet his hair, he plugged the machine into an unprotected extension cord. He trailed the wire through the garage and prepared to plug it into an outlet. Lightening flashed.

What’s it like to add on to a house?

It’s a toilet in the front yard. 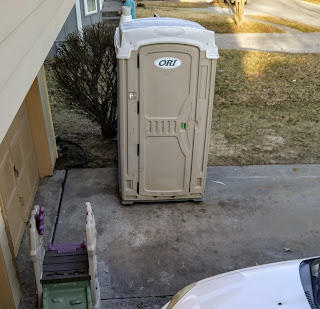 It’s gravel, cords of wood and rebar dropped on the driveway while you’re in the bathroom. 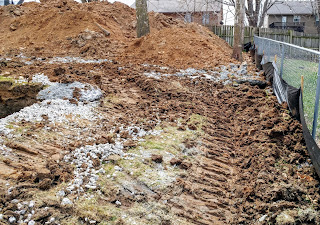 And it’s mud. Outside, inside, everywhere. Garden ruts the size and shape of backhoe treads. Waste concrete dumped wet and dried hard. Pebbles in the bathroom. Clogged drains. Late night trips to Home Depot. Nail guns, tape, sump pumps, shop vacs. It’s remembering to use the wood ladder and not the metal when it’s storming. It’s air billowing through a boarded-up door. It’s snow in April (and other delays). 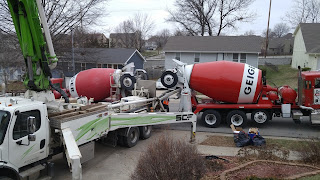 It’s (finally) getting-to-know-the-neighbors. “We want to add on, too” and “will you do one for us?” It’s a room for him, a space for her, an area for Mom and Dad. It’s the promise of closets, storage, no-wait bathrooms, another bedroom, a library. It’s a two-car garage reconverted to its original purpose (ie, cars, not boxes).

Hubby plugged the cord into the outlet. Outside, the sump pump groaned to life. Inside, the basement leak slowed. No sparks.

When the rain stopped, he would rerun the cord through the foundation opening. Raise it safely above the puddle. Cover the plug’s connection with plastic and tape. Dry and replace soaked towels. Mop.

He returned to the sloozy outdoors. His hair and skin glistened. Chunks of earth dropped from the yard-length mountain of wet dirt and settled at the silt screen that protected the neighbor’s space. Rain slowed; the air cleared. Stars shimmered around a full moon.

Water gushed from the sump pump’s hose, balanced over the new foundation wall. He wrenched a boot free from the oozing sludge and held it to the stream until his shoe was clean. 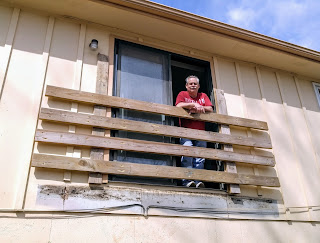 Ready for the next challenge.

OK, OK! I am convinced!! I will definitely NOT add on to my house! At least not in the near future--Perhaps after I can forget reading your blog on the subject and then we will see.
Love
Dad

I am thrilled and excited for you to be adding on to your house, BUT- Oh My Gosh! This doesn't sound like a great start. The weather hasn't been very helpful. After a number of months,Summer will be here and you will be pleased you chose to do this- It WILL be wonderful-
We have been living in a small villa with no room to put our things in order, and it has been over a year and we have eight weeks to go. Then we get to move in- need to purchase new furniture and put all of our stuff in its new place! I've been balancing writing and making new friends, and making way too many decisions.
Building has been stressful, and time consuming, but we are thrilled to see the end in sight. You will feel the same way!
Hang in there!
Sending hugs--Sheri