"He's Trying to Tell Us Something..."

Wonder Boy whined as he woke. Whimpered as he dressed. Raged at the table. He refused to play with his toys, demanded constant attention, asked to be picked up, held, squeezed.

At school, he threw himself to the ground and cried. In therapy, silent tears coursed down his cheeks.

We brought his talker to him; guided his fingers. “Something hurts,” the machine intoned. “It’s my…” His finger hovered over the bright page of highlighted body parts. 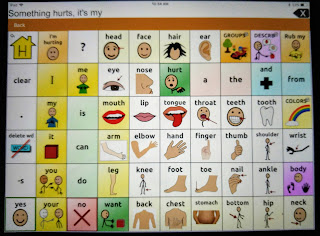 Stomach? Head? Teeth? Did he fall? Did someone hurt him?

A therapist noted a rash on his backside.

He sweats; he sits for a long time on the potty; he has sensitive skin.

Wonder Boy’s lower lip quivered. He knocked his talker to the floor. Shook his head. Stomped his feet. Flailed. Finally, his chest filled with air. He opened his mouth and screamed. High pitched, long and loud.

In desperation and on a Sunday, Super Daddy took Wonder Boy to the doctor.

About a week after beginning the medicine, Wonder Boy’s sweet personality returned. He played independently with his toys. Sat with his books. Participated in school activities; aced therapy programs.

All was well. Until Wonder Boy again refused to go outside, stopped asking for his toys, rejected the trampoline; whined.

“…he’s trying to tell us (something) with his behavior…”
Teacher

Communication barriers make life difficult for conscientious people with incompetent co-parents and is a recipe for trouble to parents of teenagers. But the ability to communicate is stolen by illness, disease and genetic differences like Parkinson’s, stroke, dementia and Alzheimer’s and is a common side effect of autism.

The ability to communicate is one of those things a person doesn’t fully appreciate until it’s gone.

How did the kids do this weekend? Are they eating and sleeping? Anybody sick?

Are you angry? Sad? Frustrated? Do you want to read a book? Play with trains? Are you hot? Hungry? Is your bath water too cold? Do you have to pee? Is your sweater scratchy? What do you want for lunch?

Where do you hurt?

In desperation and on a Sunday, Super Daddy took Wonder Boy back to the doctor where Wonder Boy was again diagnosed with strep throat.

Recurrent strep infections may be caused by repeated exposure, antibiotic resistance, neglecting to finish the medication, carrier status and in rare instances, contact with dogs.
http://www.pediatricweb.com/webpost/iframe/MedicalConditions_465.asp?tArticleId=187

Wonder Boy placed a palm on each of my cheeks. He smiled into my eyes and spoke.

The words were unformed, but they were neither script nor repetition. They were independent expression; his words.

My heart swelled with love. And hope.
3 comments: 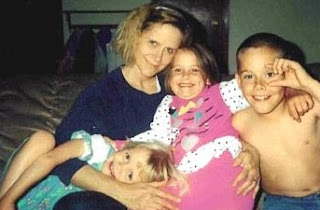 It’s the hardest job I ever loved.

My kids were fed, watered, cleaned and clipped. Taught to read, write, compute and get along in polite society. Given direction, graduated independence, religious training, boundaries, love.

Of course, the Mom Job isn’t always Mom’s job. Sometimes Dad runs the house while Mom works. Unmarried teens and others get life done with help from extended family. Grandpa cooks, cleans and gardens while burping a coo-ing baby. Step-parents help raise a partner’s child. An army of nannies, maids, housekeepers, tutors, surrogates and wet nurses do for the 1% what one person does for the family in the real world.

And sometimes? When a parent hides behind her own insecurities and disengages from her children’s everyday, Grandma pitches in to help the parent-on-deck. With talker updates. Homework, tutors, meal planning, carpooling, grocery shopping, list making. After school buses, vacuuming, ironing, scrubbing toilets and the ever-present, never-done laundry, laundry, laundry.

Hubby and I argued then about money and who got to mow the grass (while the other watched the babies). I was frequently and irrationally mad at him for having a job where he conversed with grownups in the outside world. While I wiped pee off the bathroom wall, cleaned snot from headboards and scraped chairs free of crusted spaghetti sauce.

I wasn’t perfect. I was addicted to a soap opera called The Guiding Light. I told my kids Reese’s Cups and Diet Coke were grownup-only delicacies and if they partook hair would grow on their chests. Afternoons, my son sat in his bed for two hours until his sisters outgrew naptime. While I closed the blinds, unplugged the phone, ignored the doorbell, ate chocolate from a bag and watched tv.

One minute my babies played naked in the backyard pool. The next they were riding bikes through the neighborhood, going on dates, graduating high school, doing college, moving across country, getting married.

When my kids left home, I studied languages, ran 5k’s and a marathon. Got a job. Played piano. Joined a writer’s group, attended conferences and seminars. Wrote and sold articles and short stories. Travelled the world.

And then? The most amazing opportunity changed everything: 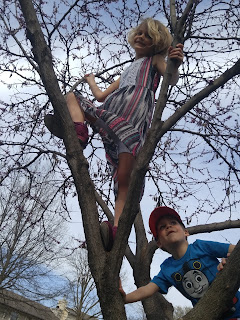 The Mom Job is different as a grandma. I need authorization to talk to teachers. I don’t sign permission slips or school notes. I have no responsibility, make no final decisions. I don’t attend IEP meetings or family therapy sessions.

My refrigerator is stocked with mac’ncheese, popsicles, fish sticks, fruit. I know the names of the Thomas the Train trains. I own a copy of “Everybody Poops.”

It’s the hardest job I ever loved. Again. 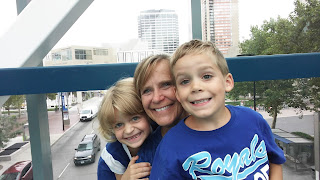 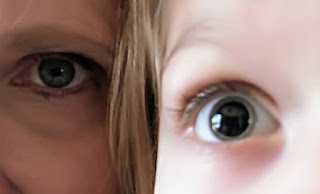 Amaze Girl scribbled. She wrinkled a corner of the paper. She wiggled in her seat and fidgeted with her shoe. She stared out a window.

I sighed. Impatience niggled at me. Babe, I said. Look here.

She startled. Rotated her attention back to the page in front of her.

She sighed. Shook her head. Tapped her pencil. Turned. Her eyes rolled to my ear, slid along my forehead, down the side of my face.

Babe, I said. Focus. My fingertips tapped the area just above my cheeks.

She opened her eyes wide until her irises were surrounded by white. Raised her chin. Frowned.

Now she was looking at me - more or less.

The assignment was math; double digit subtraction with borrowing. She knew how to do this. Why was it taking so long to complete?

Sure, there could be other concerns to address.

If your child has a vision problem, he or she may act out in certain ways…be inappropriately or appropriately diagnosed with dyslexia, ADD or ADHD. Some children appear to learn normally but become frustrated quickly.
verywell.com

Amaze Girl's first eye test was done in a medical doctor's office and showed nearly perfect vision. It took a moment but she read all the tiny numbers. Saw all the big letters.

Amaze Girl's second eye test, completed by an optometrist while her eyes were dilated, revealed a significant need for visual correction. Or in the words of one technician, "Whoa!"

"A typical child's eye muscles are strong," said the optometrist. "Muscles expand and contract, move. When muscles work hard to compensate for a visual impediment it can be a cause of focus and attention issues in school." He smiled. "Dilation inhibits the muscles' ability to adjust so we can read her true prescription." 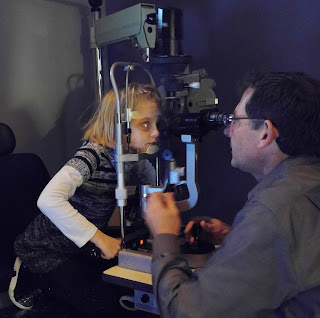 Amaze Girl is far sighted, which means her eyes focus easily on far-away objects. When she turns her attention to objects that are close up, her eyes require time to adjust. They'd labor again every time she glanced away/turned back.

After a while, the exhausted organs would be done for the day. Even if Amaze Girl was not.

If there is a problem in how easily or quickly our eyes focus, that visual problem is called an accommodative dysfunction…children have a large amount of focusing capacity…(but) may be unable to quickly change the focus of their eyes from near to (far)...
covd.org

With glasses, Amaze Girl's handwriting improved. Her intellectual endurance lengthened. Since she no longer had to wait for her eyes to adjust and refocus her reading was more fluid.

I held up my camera. Hey, Babe, look here, I said.

And immediately, without hesitation? She did. 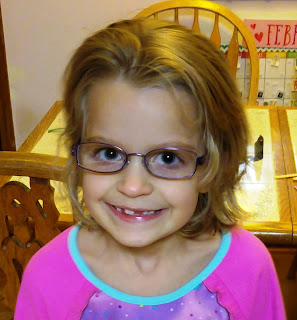