Holding on to Happiness

“Life is like a box of chocolates. You never know what you’re gonna get.”
-Forrest Gump, in the movie. 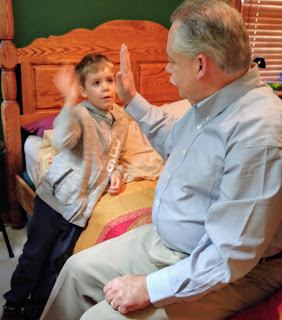 For weeks, Wonder Boy had colds and repeated strep and ear infections. There was agitation, loss of language, refusal to use his talker, jump on the trampoline (a favored activity) or play on his own. He woke from a sound sleep in tears, required constant adult attention, was not coping in school.

One day after Wonder Boy’s sedation dental procedure, his unhappiness, discomfort and unrest began to improve.

The first clue to the coming joy was the silence.

Wonder Boy is not a morning person. He does not like getting out of his cozy bed in the early light. But this week? He rose without sound. Giggled while he pottied. Danced while he dressed.

Transitioned smoothly from one activity to the next. Ate all his breakfast. Brushed all his teeth.

And while he waited for his bus? He read his books. Stimmed his trains. Played piano. Asked to go outside. Where he played some more.

And when he arrived home, he told his bus driver good-bye with words and a fist bump. Fell into his grandmother’s arms. Requested a popsicle using his talker and returned to the talker to specify the color of his popsicle. Played in the sand. Climbed a mountain of dirt. Did his piano lesson and greeted his therapist with zero screams-hits-tantrums-refusals.

He raced his therapist to the door for outside breaks. Jumped on the trampoline! Played on the slides and swings.

At the end of the day he chose his own bath bomb. Sang head-shoulder-knees-and-toes. Perused a book.

And Amaze Girl? It’s hard to be a sibling of autism, especially during periods of unrest. Amaze Girl has thrived in her brother’s happiness: joy-filled mornings. Breakfast conversation. Successful time tests. Climbed a tree. Ran for the bus.


She’s received positive reports from her teacher. After school, she raced home, arms extended, shoelaces flying; poured giggles into her grandmother’s arms. Hurried outside without bothering to snack. To her tree and sunning place. Where she climbed a mountain of dirt.

She cheerfully ate all her dinner. Finished bath on time. Built a pillow fort.

After their story times with Daddy, both shared kisses, hugs, squeezes,“ I love yous.” Lights out. Sleep. Peace.

Until the next wonderful day full of laughter, communication, connection, family reunion: 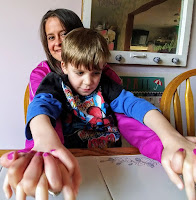 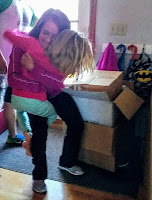 Our Katie has returned to Kansas City!

Autism and learning differences present unknowns that challenge communication, interaction and – sometimes – one’s ability to cope. But for this moment? Today?

We’re holding on to the happiness where it appears.