When he came to live with Super Daddy, Wonder Boy was 5 years old and still
in diapers. He refused to eat anything but frozen pepperoni pizza, had no
intelligible words, did not understand language, regularly tantrummed into
meltdowns, hit himself in the head and rammed his body into walls. He didn't
play peekaboo, make eye contact or sit in a chair to eat. Physically, Wonder
Boy operated at the level of an 18 month old baby. 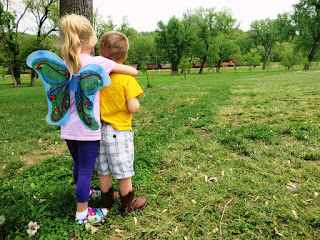 Amaze Girl was 6 years old. She didn't know her letters or numbers, had trouble focusing, sitting still, following directions, standing on line. She didn't understand how to interact with her Kindergarten classmates and had regular potty-ing accidents.

Neither child slept through the night, used silverware or drank from a cup. They didn't sing nursery rhymes or attend to a story. The muscles in their hands were underdeveloped, making writing difficult. They were terrified of
the vacuum cleaner.

Wonder Boy and Amaze Girl did not have a doctor, had not received any immunizations or enjoyed play dates with same aged peers. They'd never participated in an extracurricular activity and craved sensory experiences like sand and rice baths. Both children gnawed their paper thin fingernails ragged and Wonder Boy bit his disfigured toenails too. Amaze Girl chewed compulsively on dolls, blocks, furniture, walls, whatever was in her hand.

Two important facts about lead poisoning: to cause harm, lead must be ingested, usually by mouth or nose. And lead doesn't stay in a person's blood once exposure to the poison is eliminated.

Adults, with their mature bodies and fully grown brains, may experience reversible side effects when exposed to lead. For example: fatigue, abdominal, joint and muscle pain and a decline in mental functioning.

Children, especially those under 3 years old, with their growing bodies, developing brains, curious mouths, faces near toxic carpets and floors, are at special risk when exposed to lead. Poison courses through little bodies and into growing brains. Where it rewires panels, stifles development, destroys neurons.

When a child under 3 years old is exposed to lead, the damage done to his still developing brain is permanent.

Because she was older, and walking, Amaze Girl was at lowered risk. However, Amaze Girl's insatiable need to chew increased her exposure to the poison. When the situation was finally uncovered, at a time that both children had aged out of the highest levels of danger, only Amaze Girl still had an elevated amount of lead in her blood.

By the time he was 4 years old, Wonder Boy's blood lead level was nearly zero. It didn't matter. The damage was done.

Such a sad story, but it will have a good ending after tons of work from everyone involved and years of rehabilitation. These children are lucky to have a loving family helping them get well and readajust. Sending hugs-

A picture of life making my day.